Between Life Is Strange and Everybody's Gone To The Rapture, SWSNBN really likes video games for the first time ever. But obviously she likes those types of games. We are probably going to finish Rapture tonight. Any suggestions for similar games available for PS4 that are good? As far as I can tell the genre is called "Walking Simulator" though she calls them "Walk around and look at pretty shit" games.

You would have thought the vampire genre had done everything by now. Then, you see A Girl Walks Home Alone At Night, and realized you've never even considered the poissibility of an Iranian, feminist vampire skateboarder, who inhabits a movie that is shot like a Sphagetti Western and ends up being a love story.

This film feels like something from the 50s or 60s in a good way. Shot in black and white in California it takes place in a part of Iran called Bad Town.  A girl in that city walks alone at night and deicides which people she is going to eat. She seems to have accepted that she's a vampire and decided to use her hunger to get rid of people she consideres dick weeds.

She meets a guy dressed like Dracula after he's left a costume party. And then things get weird. To say any more would be to give spoilers. But I will say if you want to watch something different and see how much fun a director can have playing with genres this film is more than worth it.

Also, for reasons I won't get into, this film is great for cat lovers. 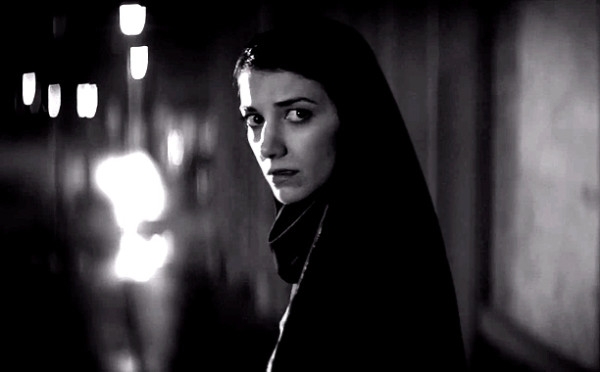