Have you been following the events at Gawker over the last two days? If not you might want to do so while Gawker still exists.

2. A rent boy contacted Gawker claiming that he'd been hired by a married Conde Naste executive.

3. Gawker prints the accusations without checking them. Names the executive and runs his photo.

4. Turns out the rent boy is psychotic, most of what he told Gawker probably wasn't true and had been trying to blackmail the executive.

5. Gawker Media's legal and business side point out to Gawker that even if the story was accurate publishing it violated a whole bunch of laws, because the executive is not a public figure, no verification was done and under the RICO Act Gawker could legally be considered a co-conspirator in an interstate extortion scheme.

6. Story is deleted from the site.

7. In the wake of that former Gawker Editor Richard Lawson tweets that while he was working at Gawker Denton ordered him to publish four stories that they knew not to be true accusing James Franco of being a gay rapist. 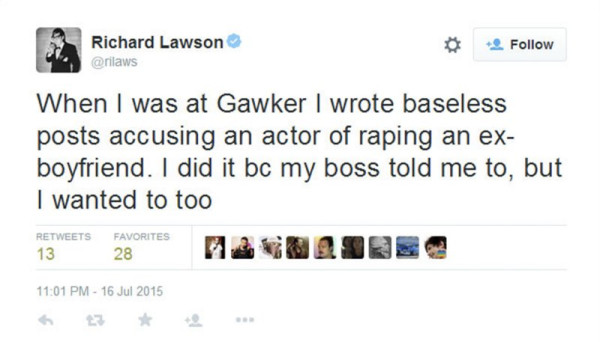 8. Gawker's editorial staff then very stupidly publishes a statement saying they are angry that the rent boy story was pulled. Why is this a bad idea? Well, you can read it explained by lawyers in the comments, but it comes down to that it demonstrates that the Gawker Media staff has a reckless disregard for the truth.

9. Anyway it will be interesting to see who gets the majority of Denton's money - Franco or the executive.

(P.S. Please do not mention the executive's name in comments. If you want to generally describe him that's fine, but I think anyone who publishes the dude's name at this point is insane.)
Collapse