Two years ago I blogged that the only way for Europe out of this mess was to try for dollar parity.

I got stomped on in the comments by people who said it couldn't happen because it would totally fuck up the FOREX.

The ECB is fairly obviously looking for dollar parity and it has been fucking with the FOREX. Several large trading firms had to shut down last week when the Swiss unpegged their currency to the Euro. The firms were in no position at all to cover the losses of their investors. And, that sucks, but sometimes investors have to fucking lose.

You can see the ECB plan to get to parity with their long term bond buys. That plus the Swiss have pushed the euro from being worth $1.38 just a few months ago to $1.12 today which is a huge change. The continuing buyback will push the euro down some more - as will the Greek election results.

This is a good thing for Europe.

France, Spain and  Italy live or die on tourism and exports.  Tourism was down for years in those countries because the Euro was so high that booking hotel rooms was crazy expensive and doing stuff even more so. It was like a 30 to 60 percent tax on American tourists (at one point the euro was worth $1.61.)

Exports were also fucked. The extra markup associated with the Euro meant people bought Argentinian wine instead of French wine, Califnornian  instead of Italian olive oil and fewer Spanish fruit and spice exports.

Beyond that it made euro denominated debt much more expensive to service from their international dollar based accounts.

Droping to parity solves all those problems. And, it doesn't even fuck the Germans that much, because a 30 percent drop in the price of BMWs is not a horrible thing for them.

Two of the remaining Starks at the Screen Actors Guild Awards. 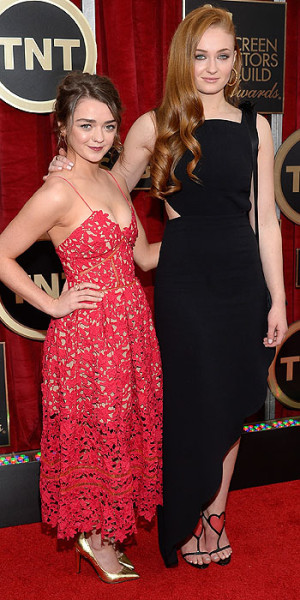