Been going through the various Best Horror Movie Of 2013 lists while waiting to get over this stupid flu. Here's what I've watched so far and my general impressions.

Contracted - The best of the indie bunch. Great, original premise. Very scary and with a decent message about how people react to sexual assault.

Insidious - Had to watch this before I could watch Insidious 2. Awesome rethinking of a haunted house story. Very well done and very scary.

Insidious 2 - Not as good as the first one but still very, very clever.

Dark Touch - Also really good. Flips around the Carrie myth to make it an allegory about childhood abuse in rural Ireland.

Resolution - Interesting in that it doesn't seem like a horror movie until the very end and then you realize what's happening and it's freaky as shit.

We Are What We Are - Completely and totally awesome.  Brutal, scary, in your face pure horror. Almost as good as Contracted.

You're Next - Generally very well done traditional horror movie - but I think the reveal came out too early in the film.

Black Rock - Billed as "Feminist horror" it's neither feminist nor a horror film.

"Joan Jett's the one that I still get a little shaky around. She did what I did in such a crazier way." 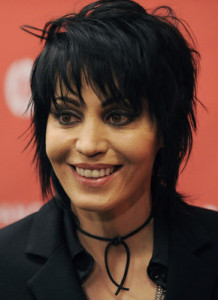