Tonight was a full feast of friends at the Vert Anglais, even though it was one of the rare nights when The Stingles were playing instead of The Waves.

But it was a good night because we had Hippy IT Boy, both parts of Woody Allen Reference, the Non Jewish Carpenter, Chip and Chip's Dad and various other assorted happy drunks with us.

The Stingles policy is that they mostly play songs by either Sting or the Beatles. Since I hate both Sting and the Beatles it is a huge compliment to their charm and personality that I'm happy to watch them anyway.

Plus, they did vary their repertoire a bit and played "Hotel California" and "Enter Sandman."

They also played "Faith" by George Michael. And by doing so confirmed a feeling I've had for several years.

That is, that "Faith" when played by George Michael or any other seriously professional band is awful pop shit.

But... when played by any type of bar band that isn't professional is the greatest song ever played. There is something about "Faith" that makes the song sound better the less professional you are.

Over the last 10 years or so I've heard it played by metal bands, ska bands, 80s cover bands, fuckwit asshole bands and whatever. And the rule of thumb is that the worse the band is at playing any other song, the better "Faith" sounds when they play it.

Then we got into the "Gak Discussion."

This discussion is based on

twain saying a couple weeks ago that "Gak" is what people in the UK call cocaine.

Both Members of Woody Allen Film Reference (who are very, very English) told me tonight that they'd seen

twain say that and they disagree. They suspect that "gak" is a regional usage and that in most of the UK there would be different terms for it ("Charlie" is the one that makes the most sense to them.) They assure me that no fellow English person they have ever met has ever used the term "Gak" to refer to cocaine.


Which leads me to the point of this post:

1. If you are English is "gak" what you would call cocaine?

3. If you are UK have you ever heard "Gak" before?

4. No matter if you are UK or USA what do you think is the best slang term for "cocaine."

5. One of my friends calls cocaine, "Blond Ambiation." Does this make him cool or a dork?

I had a long session with my shrink today. In fact I think it was the first time I actually cried in front of her.

The gist of the conversation was that I feel sort of "washed out" and drained today.

"I just don't have any motivation to do anything but write fake press releases about Star Wars characters and sip lemonade in cafes. I feel like a piece of paper with faded ink," I told her. "I'd like to say that I feel defeated, but that's a lie. I feel like I don't even want to try anymore. I just want to give up before defeat can happen."

"You've had too much reality lately," was her response. "There is a beauty with your faded ink metaphor. I think you need to write about unreality until you can recharge yourself. And if you really wanted to give up you wouldn't be here."

She has a point.

But real jobs pay the bills.

I was talking with a young woman last night who recently had a problem with a new sexual conquest.

So, she asked us older and presumably wiser people what she can do the next time, so she's not stuck staring at the ceiling planning her grocery list while the chump pumps the night away.

But, I figured you guys might have other, better ideas.

"Senator Papatine's chief of staff, Anakin Skywalker, is, to put it bluntly, a deadbeat dad," one Obama aide said. "He not only abandoned both of his children, he actually cut the arm off of his son."

Skywalker immediately struck back, calling the allegations both "malicious" and "deeply disturbing."

He explained that as a single father serving in the army during a time of war he did not feel capable of raising his children himself.

"I only wanted what was best for Luke and Lea," Skywalker said. "I arranged for full adoptions for both my offspring on Alderan and Tatooine."

Skywalker also said that the allegations of abuse against his son were taken out of context.

"I have always been a strict believer in law and order and don't think that my son should have gotten special treatment," Skywalker said. "He was breaking the law and involved in a terrorist organization. Sometimes children need discipline. Spare the lightsaber and spoil the child."

Meanwhile, the Obama camp was shocked yesterday when New York Political Activist Al Sharpton announced that he was endorsing Palpatine.

"Palpatine's chief of staff, Anakin Skywalker is much more black than Obama," Sharpton said. "And I believe that Palpatine truly understands the concept of 'No Justice. No Peace."

"Obama is the only true hope for humanity," Baltar said.

You asked for a blond! 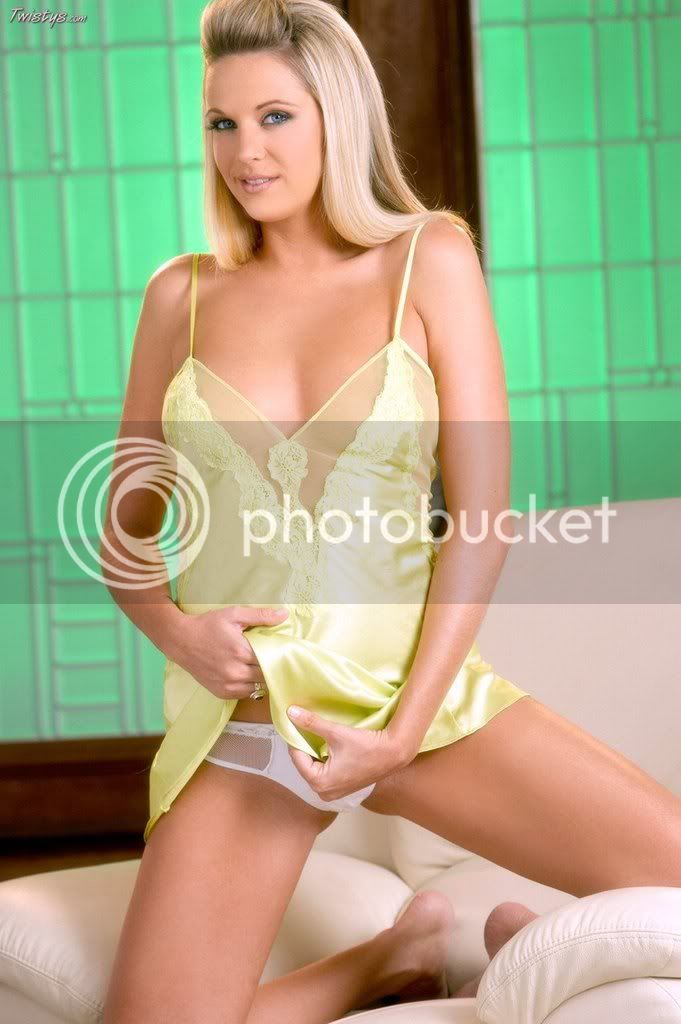 sushis points out, the woman who is freaking out because Angels In America is being taught in a high school English class has now opened up her blog to any and all comments.

Here is what she says:

"They are justifying this book as good literature because it won some award. Hum, I wonder who voted for that. I bet we can all guess correctly on that."

I think this is the first time I've ever heard of the Pulitzer Prize described as "some award."

You dudes will send me nearly 100 comments if I dis Obama, but when a group of idiots tries to take down a school system for teaching Angels In America you let Rome Girl and I make all the comments.

The real way to change things is not to yell at your fellow liberals when you have a minor disagreement. And real change doesn't come from the president, it comes from local municipal governments and local school boards.

So please, for once use the energy you'd use to dis me if I said "Obama is a fag" and instead take 40 seconds to go to that site and explain why Angels In America is a good thing for AP English students to read.

No, you probably won't convince that blogger of anything, but if you make one of her readers change their minds or read the text themselves you've done some good in the world.