I had a great birthday.

I talked to my dad.

We disagreed, but we talked.

I kissed Rome Girl while hearing "king nothing" by Metallica

My birthday started around 11 a.m. when Rome Girl and I both woke up. After smoking a couple cigs, she proceeded to lay me down and give me an epic blow job. I hadn't even masturbated in like three days, so the orgasm was a massive money shot.

Then I went over to Fitzpatrick's Irish Pub and had a couple pints with Young Scottish Boy, Gay Face and Mr Twist.

I went home and played Resident Evil 4 until The Iceman came over around six. I kicked some serious zombie ass.

Rome Girl cooked us a bunch of burritos and stopped at Fiztpatrick's for a quick pint before moving on to La Huit for some awesome cocktails. I had mohitos, Rome Girl had Chocolate Martinis, Miss Darling had huge mint things and The Iceman refused to drink because it was too girly for him.

Next up on the agenda was O'Carolan's for pints and vodka shots. Miss Darling went nuts on the Jack and Cokes, ended up falling down, aruging with random girls in the bathroom and finally falling asleep on the bar. We arranged for a taxi to get her home safe.

Colombian Girl was there too and was recently dumped by her boyfriend, so she was sad, but the girls talked to her for a while, agreed that men suck and cheered her up.

Aftewards we hit the Fizz, the worst bar in the world, and did more shots before heading home to sip beer and watch Metallica DVDs.

They painted the bathrooms at Fitzpatrick's Irish Pub.

They look orange to me but Rome Girl says they are red.

The Iceman says the color is called "Blaze." 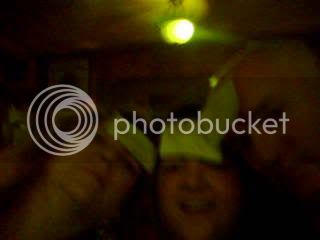 What do you think is the worst abomination in rock:

3. Something I have not thought of?
Collapse